from Gujurat to Leeds… DM has been inspiring young people around the globe!

Debating Matters’ reach has extended further than Europe in the last two years. In 2020, former director of DM and current curriculum manager for Mathematics at MidKent College, Tony Gilland, developed a highly successful new pilot debating tournament – DMGBIN – for 16- to 18-year- old students in India and the UK which was inspired by his work at Debating Matters.

On Sunday 27th February this year, the final of the second DMGBIN tournament took place. Over four months 16 schools, eight from the UK and eight from India, battled it out for a place in the final debate. Each school competed in three debates over Zoom to win a place in the semi-finals and then the final of the tournament. This year’s finalists were newcomers Navrachana International School, from Gujarat in India and longstanding DM participants Oakwood Park Grammar School from Kent in the UK.

Joining DMGBIN at the final for the prize-giving ceremony was one of the founders of Debating Matters, Claire Fox, director of the Academy of Ideas and an independent peer in the UK’s House of Lords, and Geoff Kidder, CEO of the boi charity which currently hosts DM. It was an exciting occasion with a completely new debate motion and Topic Guide: ‘Restricting hate speech is more important than protecting freedom of speech’. The content of the debate was challenging for both teams as the context is quite distinct in each country. Communal and religious tensions in India give rise to significant concerns about the impact of hate speech which are not directly comparable to concerns in the UK. However, both teams did a fantastic job of demonstrating a solid familiarity with all the arguments and were insightful and forceful in their defence of the importance of free speech or in arguing for restrictions.

Throughout the whole DMGBIN tournament it has been especially rewarding to hear students get so much out of engaging with their peers in a completely different country, and about issues of importance or interest to them all, but often in very different contexts. As Izzy Ottembrait commented, ‘Debating with the teams from India provided a broadened world-wide perspective and it certainly made the debates more challenging due to the global examples and experiences used.‘

This was a perspective endorsed by Lily Rana, the teacher from Navrachana International School, who said her team ‘had a remarkably rewarding experience, particularly, in recognising the onus on youth in their role as global citizens.‘

At this year’s final, the judges took a long time to make their deliberations, a real testament to both teams but finally they came to a decision and awarded the win to Oakwood Park Grammar School who argued FOR the motion. Congratulations to Oakwood Park DMGBIN champions 2021/22!

Congratulations also go to Navrachana International School, runners up in their debut year of competing in Debating Matters.  The Best Individual prize was awarded to Ashwin Knight of Oakwood Park and the Highly Commended prize went to Ashvika Menon of Navrachana. The tournament was organised by volunteer DM supporters and we are grateful to all of them. To find out more about the competition email: tony.s.gilland@gmail.com or Follow DMGBIN on Twitter @dmgbin

A bit closer to home, the DM format returned to live action in Leeds in January of this year as the annual Yrs 10 & 11 debating competition run by The Leeds Salon in partnership with Switalskis Solicitors took place.

The Final of the competition was on Wednesday 30th March at Thackray Medical Museum between qualifying round winners Abbey Grange Academy, Carr Manor Community School and Outwood Grange Academy. 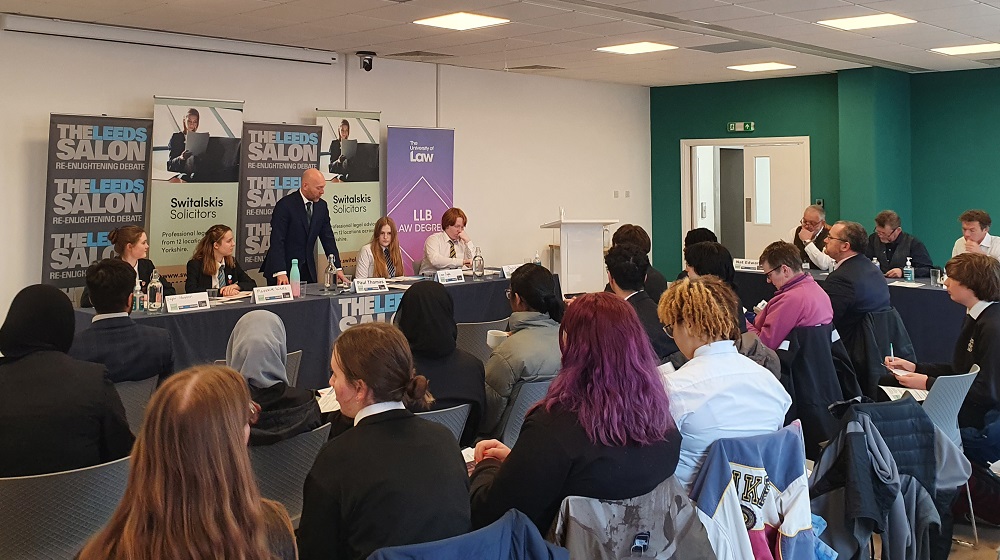 In a lively and competitive round-robin style format, each team played to their strengths across the six debates. The students demonstrated a good knowledge of the debate topics and how to defend their arguments. However, in the end, there can only be one winner so congratulations to Isabel Dixon-Hardy, Delphi Harrison, Abi Hector-Goma and Madeleine Wells from Abbey Grange CofE Academy who were declared 2022 champions by the judges!

And grateful thanks to venue partners Thackray Medical Museum, as well as prize partners The University of Law (Leeds), and award-winning multi-media company, Tectonic Interactive.

From everyone at DM, congratulations to Paul Thomas, co-founder of The Leeds Salon for managing to organise yet another successful competition, engaging 14 to 16 years-olds in difficult contemporary issues such as “Tech companies should act to stop online misinformation”, “Technological progress will not solve society’s environmental issues”, and “Vaccine passports benefit society”  and very well done to all involved!